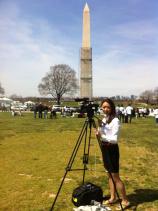 Jackie Ho is an award-winning writer, producer and director from Washington, D.C. with 10 years of professional experience.

Currently, Ho is the Digital Marketing Specialist for Swig Life, where she develops, maintains and implements digital marketing and strategies to drive and meet sales goals.

Prior to joining the Swig Life Team, Ho led the video department at national video production company Motion Video as the Director of Video. She also worked as a producer/project manager and Studio Director for 522 Productions, a video production company located in Alexandria, Virginia. At education company K12, she produced, shot and edited all internal and external video projects for the marketing department. Ho was also a producer for HealthCentral, where she took the lead as Executive Producer on HealthCentral’s award-winning immersive storytelling initiative called “Live Bold Live Now.”

Ho has gained a wide journalistic and multimedia skill set from working on a variety of projects over the years, including writing and reporting for National Geographic, AOL, Manhattan Magazine, Front Desk Magazine and various local news outlets. While earning her master’s degree at American University, Ho was a reporter for the campus newspaper, The Eagle, and was an investigative reporting and web production intern at The Investigative Reporting Workshop, where she worked closely with reporters and producers on various projects for FRONTLINE and the Workshop’s website. She also worked as a general assignment broadcast reporter for District Wire News, a news segment based out of Washington, D.C., where she wrote, shot video, conducted interviews, reported on-air, edited and produced packages as a “one-man band” on quick deadlines.

As a producer, Ho has led several projects from start to finish, from kicking off projects with clients and creating concepts and storyboards to writing scripts, overseeing shoots in the field, conducting on-camera interviews, managing budgets, handling schedules and logistics and assisting and supervising post-production.

Her current goals include continuing to sharpen her video shooting/editing and storytelling skills and produce projects across all mediums that both inform and inspire others.

For questions or inquiries, she can be reached at jacquelineho88[at]gmail[dot]com.